Addressing the event theme of “Redefining the end-to-end travel experience”, the ‘On the Ground’ and ‘Up in the Air’ conference streams included presentations from the likes of Disney Destinations, Norwegian Air Shuttle, United Airlines, American Airlines, Microsoft, Vancouver Airport Authority, Air France-KLM, Delta Air Lines, Hilton Worldwide, Japan Airlines, Dubai Airports, Virgin Atlantic, U.S. Customs and Border Protection and many more. The industry’s most innovative suppliers also showcased their latest products and services that have been created to enhance the passenger experience on the ground and in-flight in the biggest FTE exhibition to date. Here we round up some of the key announcements, launches and discussion points from the show.

Inspirational Keynote: Disney Destinations – ‘You’ve got to learn from your guests and learn what their needs are’

FTE Global 2014 delegates were welcomed to Las Vegas by Rob Elliott, Senior Vice President of Public Affairs at the Las Vegas Convention and Visitors Authority (accompanied by two of Las Vegas’ famous showgirls), ahead of the Inspirational Keynote, which was delivered by Bob Simmonds, Vice President Domestic Travel Operations, Disney Destinations. Simmonds highlighted innovations such as MyMagic+, an RFID-enabled wristband that can be used by Disney’s guests to access their room, pay for goods and identify themselves at checkpoints in the theme park, and suggested that airlines and airports could learn from this as the industry seeks to create a single passenger token.

The three-day event included multiple keynote addresses, offering perspectives from both within and outside of the industry. Norwegian Air Shuttle’s Bjorn Erik Barman-Jenssen, Senior Vice President Ground Operations, In-flight Services & Cargo, lauded the company’s “fresh air thinking” and challenged its transatlantic competitors to rise to the challenge posed by the carrier’s low-cost long-haul operations. He also suggested that the industry should focus more on improving the travel experience for economy travellers: “It’s frustrating that so many companies are making great solutions for just 10% of passengers,” he stated. “Why not do it for 80 or 90% of passengers?”

Hilton Worldwide’s Josh Weiss, VP Brand and Guest Technologies, spoke of the joint benefits for the hospitality, airport and airline industries “if we can make people love travel”, and explained that “we have to adapt in this rapidly changing world”.

Delegates were also treated to an insight into how new technology can create truly seamless travel experiences by Microsoft’s Greg Jones, Industry Director, Worldwide Hospitality & Travel, and Delta Air Lines’ Matt Muta, VP Innovation & Commercial Technologies. A fascinating vision of how the destination can be integrated into the aircraft, airport and city was also put forward in a joint keynote by Intel Labs, Teague, IIT Institute of Design and Choose Chicago.

The first ever Cabin Integration Symposium, delivered in partnership with Runway Girl Network, took place on Day 1 of FTE Global 2014, and the industry’s biggest players in the aircraft connectivity and interiors space took to the stage, led by Mary Kirby, Runway Girl Network’s Founder and Editor.

Offering unparalleled insight into the benefits of, and obstacles to, complete cabin integration, the second part of the session saw Airbus, Inmarsat, Panasonic, Honeywell, Thales, OnAir, United, Gogo and Global Eagle Entertainment all on stage together taking part in an in-depth discussion.

The ‘Up in the Air’ conference stream also hosted the ‘Premium Passenger Experiences Forum’ on Day 1, which was led by Raymond Kollau, Founder of airlinetrends.com. Following presentations by Finnair and American Airlines on how they are improving and differentiating their onboard experiences for premium travellers, Kollau was joined by Teague’s Principle Communications Strategist, Cameron Campbell, to facilitate an interactive ‘Unconference’ session in which delegates were invited to offer their own thoughts and opinions.

Airport Terminal of the Future Workshop

In the ‘On the Ground’ conference room, the event kicked off with the Airport Terminal of the Future Workshop. Led by Kiran Merchant, CEO of DY Consultants, delegates heard about forward-thinking projects from the likes of Halifax International Airport Authortiy, Gensler and San Francisco International Airport, before breaking out into an interactive session. Such was the demand for the workshop, a total of 18 working groups established their own visions for specific elements of the future airport, before sharing their findings with their fellow delegates.

Day 1 in the ‘On the Ground’ conference stream continued with the Baggage Advancements Forum, in which the likes of McCarran International Airport, Air France-KLM, Avinor, COWI, HomingPIN, Bags Inc. and Vanguard ID Systems discussed the role that permanent and home-printed bag tags, baggage delivery and common use bag drop will play in the future. The focus then switched to the New Technology Forum, which included intriguing insight from Changi Airport Group (pictured), American Airlines, IBM, Air France-KLM, Bluvision and Rockwell Collins/ARINC Airports on the impact that mobile technology, iBeacons and various other technologies will have on the future travel experience.

The first day came to a close with the FTE Global Welcome Reception, in which delegates got their first look at the biggest ever FTE exhibition (which even included a DeLorean on the HomingPIN booth!). The World Cup-inspired reception included Brazilian food and music, as well as the FTE World Cup penalty shootout, which was won by Ireland thanks to a sudden death goal by HomingPIN Director Brian Stapleton.

The FTE Global 2014 Exhibition, the biggest to date, saw 32 of the industry’s leading vendors showcase their latest products and services that have been developed to enhance the passenger experience. The wide array of solutions on show included permanent bag tags, wireless IFE streaming systems, digital display screens and self-service bag drops.

‘On the Ground’ conference – a roadmap to viability, the airport of 2030, and future airport security and immigration models

The FTE ‘On the Ground’ conference keynote address was delivered by Rohit Talwar, CEO of Fast Future Research, who offered an awe-inspiring insight into the technological developments that will help to shape the future of travel, and outlined a roadmap to viability for the various companies in attendance. Following his presentation, Rohit chaired a Q&A discussion with Craig Richmond, President & CEO of Vancouver Airport Authority, and Ken Bostock, Managing Director, Airport Strategy, United Airlines. Delegates were then offered insight on the airport of 2030 and the future of airport immigration and security checkpoints. Among the speakers was U.S. Customs and Border Protection’s (CBP) Dan Tanciar, Director – Travel and Tourism Initiatives, Office of Field Operations, who outlined how Automated and Mobile Passport Control is helping to enhance the inbound customs process, and revealed how else CBP plans to improve customer service levels while maintaining border security.

‘Up in the Air’ conference – ‘inspiring humanity’, in-flight customer experience excellence and the future of connectivity

Eash Sundaram, Executive Vice President and Chief Information Officer, JetBlue Airways, delivered the ‘Up in the Air’ keynote address, in which he outlined how the low-cost carrier is achieving its mission of “inspiring humanity” through cabin enhancements, customer service and reliable, high-speed in-flight connectivity. Runway Girl Network Founder and Editor Mary Kirby then hosted American Airlines’ Managing Director of Onboard Products, Alice Liu, and British Airways’ Head of Product and Service, Kate Thornton, both of whom outlined how their respective carrier is enhancing the in-flight experience through technology and bold thinking. “This is not just a conference, this is a place for creative thinking,” American Airlines’ Alice Liu, Managing Director of Onboard Products, told delegates.

The third day of the event saw all delegates come together for the joint ‘On the Ground’ and ‘Up in the Air’ conference day, and among the highlights was the FTE Wearable Technology Forum, in which Virgin Atlantic, Japan Airlines, SITA and Droiders outlined how they have used smartglasses and smartwatches to improve airport and airline processes and the passenger experience. SITA’s Chief Technology Officer Jim Peters explained that the company is working on a Google Glass app that can read flight, baggage and passenger information, while Virgin Atlantic’s Tim Graham, Technology Innovation and Development Manager, confirmed that the carrier plans a permanent Google Glass rollout among staff in the Upper Class Wing at Heathrow Airport following the successful trial earlier this year.

FTE Global 2014 delegates were also able to take part in guided tours of Las Vegas McCarran International Airport’s Terminal 3. Starting curbside and working through the terminal and onto the apron, the tour gave delegates a unique opportunity to experience the airport’s common use self-service facilities in action first-hand.

Only at FTE Global!

It’s not every day that McCarran International Airport, Norwegian Air Shuttle and Hilton Worldwide come together to form a rock band, but that’s exactly what happened at the FTE Global Gala Party at the House of Blues! That’s what we call true collaboration! Also, not to be upstaged by Las Vegas Convention and Visitors Authority’s Rob Elliott (who arrived on stage accompanied by two Las Vegas showgirls), Fast Future Research CEO Rohit Talwar went one better and arrived arm-in-arm with Craig Richmond, President & CEO of Vancouver Airport Authority, and Ken Bostock, Managing Director, Airport Strategy, United Airlines. It was also great to see two new FTE Global innovations go down well among delegates. The FTE Global 2014 app was well received, while delegates made the most of the free massages on offer in the exhibition hall. 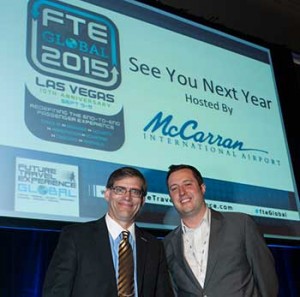 We are delighted to announce that Future Travel Experience Global 2015 will again be hosted by McCarran International Airport in Las Vegas.

The 2015 show will be the 10th anniversary of the event, which started as disCUSS in Las Vegas back in 2006, so the entertainment capital of the world provides the perfect location for us to mark this special occasion!

The show will be held at the Mandalay Bay Resort from 9-11 September 2015. Stay tuned for more details on the show, which will be announced in the coming months.

Did you miss out on FTE Global 2014? If so, the good news is that you can still view all the presentations and take a virtual tour of the exhibition with FTE Post-Event Virtual Conference and Exhibition Access.

This comprehensive, online, video-based package provides access to every speaker presentation from both the ‘On the Ground’ and ‘Up in the Air’ conference streams, including high-definition video footage of the speaker, which is presented side-by-side with the presentation slides as delivered on-stage. You will also have access to a booth-by-booth virtual exhibition tour, which highlights all of the passenger-focused solutions and services that were presented in the FTE Global 2014 Exhibition.