Qantas has unveiled its new Premium Economy product, which will debut on the carrier’s fleet of Boeing 787-9 Dreamliners from October 2017.

The new Premium Economy cabins will feature 28 seats, configured in a 2-3-2 layout. The carrier says the seat is almost 10% wider than its existing Premium Economy seat and the seatback in-flight entertainment (IFE) screens are 25% larger at 13.3 inches.

The new seat also features an ergonomically designed headrest that can be fitted with a specially designed pillow, and a re-engineered footrest to increase comfort when reclined.

Five individual storage compartments and two USB ports are included per seat, as well as shared A/C power and a personal LED light.

The seat is based on a prototype by Thompson Aero Seating, which has been heavily customised by Australian industrial designer David Caon. 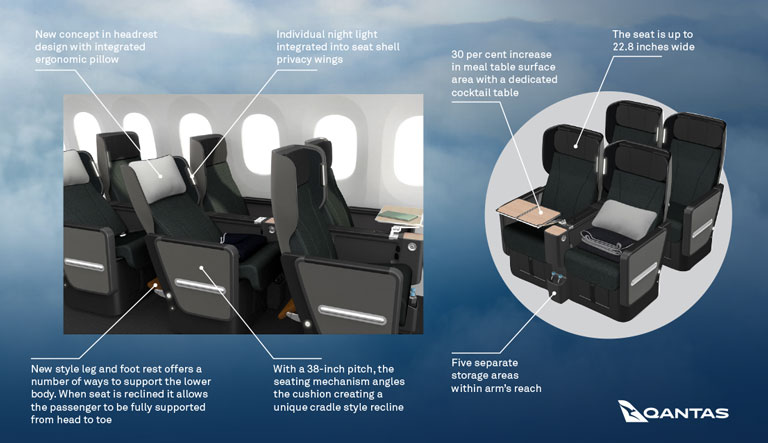 Commenting on the new Premium Economy, which will be flying on some of the longest routes in the world, including Perth to London, Qantas Group CEO Alan Joyce said: “This new Premium Economy seat has serious wow factor. You have to experience how well it supports you when you recline to realise it’s completely different from anything else in its class.

“When you combine these seats with the increased cabin humidity and turbulence reducing technology on the Dreamliner, it makes it an aircraft customers will really enjoy flying on.”