SEA Milan Airports has acted fast in response to the COVID-19 crisis, readapting continuously, and communicating frequently and frankly with all stakeholders and staff. FTE speaks to Armando Brunini, CEO SEA Milan Airports, as travel restrictions are gradually being eased and the operator of Malpensa and Linate airports is seeing the first signs of a recovery.

“Milan was the first Western metropolis to be hit by the pandemic and to be engaged in the fight against the virus with the introduction of a lockdown,” Brunini begins. “Current estimates foresee a -40% loss of inbound travel and nearly -60% negative impact on MICE (meetings, incentives, conferences, exhibitions) business this year. The measures imposed are showing clear results and since 3 June travel within Europe is allowed.”

Milano&Partners, the promotion agency of the city of Milan, recently launched a new YesMilano communication campaign – “A new start. One step at a time” – which is promoted by the Municipality of Milan and the Chamber of Commerce of Milan Monza Brianza Lodi, and supported by SEA Milan Airports.

“Lombardy is the third-largest manufacturing region in Europe in terms of number of employees and Milan’s per capita GDP is 30% higher than the European average – it therefore has the resilience to sustain a strong recovery,” says Brunini.

Brunini took the helm as CEO of SEA Milan Airports in January 2019 after acquiring extensive experience in the airport sector, which has seen him play a key role in the considerable growth of air traffic, first as Managing Director of Bologna Airport (2007-2013) and then as CEO of Naples Airport (2013-2019). Indeed, under Brunini’s leadership the airport of Naples tripled its growth compared to the national average, recording an increase of 82% in passenger traffic in five years.

After having led the development and transformation of the airports of Bologna and Naples, he is now fully committed to leading SEA Milan Airports, the airport system serving one of Europe’s most dynamic cities, to its full potential.

2019 saw considerable growth at Malpensa, strengthened by the three-month closure of Linate for runway refurbishment works and the temporary transfer of traffic from Linate to Malpensa.

Therefore, Malpensa grew by 16.9% to 28.7 million passengers last year. Net of the activity transferred from Linate, traffic was up 9.1% to 26.8 million passengers. It was a year of expansion at Malpensa, with 40 new services, two new airlines and 13 new destinations, including two major long-haul services to Los Angeles and San Francisco.

The positive trend continued at the beginning of 2020, with 10 new services, four new airlines and seven new destinations, among which three new intercontinental services stood out: Eva Air to Taipei, ANA to Tokyo, and Gulf Air to Bahrain.

Then, after the COVID-19 crisis hit in late-February, within only a couple of weeks passenger traffic dropped by -99%. “So basically, we have been working with close to zero income for the last three months. Only cargo saw a limited reduction in volumes,” Brunini comments. “We entered the crisis only a few weeks before the rest of Europe and the world, so we are facing the same challenges and I am sure that we are often adopting similar approaches. In a nutshell we are acting fast, readapting continuously, and communicating frequently and frankly with all stakeholders and especially staff.”

SEA Milan Airports certainly responded quickly. Just 24 hours after the establishment of the first “red zone” in a small city near Milan, the airport operator set up a Crisis Committee and defined 10 working streams with dedicated project teams. “The first to kick-off and deliver results were aimed at containing health risk, cutting costs and preserving cash position,” Brunini explains. “After a few weeks our efforts were also very much dedicated to facilitating the recovery of operations and trying to imagine what possible ‘landscape’ and what structural changes we might find when the crisis is over.”

The first signs of recovery

In order to limit costs, passenger traffic has been operating only from Malpensa’s smaller Terminal 2, which has remained open throughout the crisis providing services for essential travel. To accommodate growing traffic volumes, within the framework of relevant COVID-19 safety measures, activity was transferred to the airport’s larger Terminal 1 on 15 June.

“Since the beginning of June restrictions are being gradually lifted and we are seeing the first signs of a recovery, with many of our most important airline clients planning to restart or increase their operations between mid-June and the beginning of August,” says Brunini. “Nevertheless, undoubtedly this coming summer will represent a fraction of normal volumes.”

As traffic grows and restrictions are loosened, Linate, which was temporarily closed, has now also reopened. A major refurbishment of the terminal is currently in progress.

“It is important that, in this negative scenario, we find a positive project in order to convey a message of encouragement to the market and our community,” says Brunini. “In the midst of COVID-19 we announced the establishment of Wizz Air’s first Italian base at Malpensa. They will begin flying in July with five based aircraft.”

The positive news, announced at the end of May, will see five A321s based at Malpensa. Complementing the eight routes already operated from the airport, Wizz Air has announced 20 new services to 11 countries from Malpensa, starting in July.

As passenger traffic returns, comprehensive health and safety measures are being implemented. These centre on three key pillars: social distancing and masks, special cleaning procedures, and temperature measurement both at departures and arrivals.

“We have a massive campaign to inform passengers, signage throughout the airport, and extra staff to monitor consistent behaviour,” Brunini explains. “It is clear to us that social distancing in particular is an understandable measure in this phase, but also that it is not viable in the longer-term since it limits throughput by at least 50%.”

Meanwhile, SEA Milan Airports in collaboration with ENAC, the Italian Civil Aviation Authority, has signed to participate in the health and safety measures recommended in the COVID-19 Aviation Health Safety Protocol, jointly developed by EASA and the European Centre for Disease Prevention and Control (ECDC).

A new five-year strategic plan was approved by the Board of SEA Milan Airports shortly before the COVID-19 crisis. This focused on five key pillars: passenger experience, continued growth, people engagement, cost optimisation, and sustainability.

“Of course, we will need to work on a new strategic plan,” Brunini explains. “Some of the pillars of our ‘20-24’ plan will probably be confirmed but readapted, such as the enhancement of seamless and pleasant travel for our passengers, and a firm commitment on sustainability. Undoubtedly, the CAPEX plan will be redesigned with less need for infrastructure development and an even greater focus on technology. We will also need to be open to possible changes to our business model.”

Linate Airport is currently undergoing a holistic refurbishment. The €100 million investment began in 2018 and is scheduled for completion in spring 2021. The first projects included a new façade and a new arrivals hall, while the three-month closure of Linate last year enabled runway refurbishment works and the installation of a new hold baggage screening system.

“At Linate, you’ll see a different flavour and a different atmosphere,” says Brunini. “We’re doubling the commercial space. We have 10 new brands coming and 15 of the existing shops are being totally renovated. So, commercially, it is going to be a new experience.”

There are also plans for an omnichannel approach, with the physical retail offer complemented by a digital marketplace.

The commitment to enhancing the passenger experience is also evident in the Face Boarding project being trialled throughout 2020 in collaboration with Alitalia on the flagship Milan Linate-Rome Fiumicino route. The biometric technology enables travellers enrolled in the trial to go through security and boarding using facial recognition, without needing to show an identity document. Brunini describes it as a seamless process that, technically, is working very well.

Coming out of the crisis with fresh innovations

With such an unprecedented crisis as COVID-19, it remains too early to make accurate projections about the recovery of airport traffic. “Sentiment seems to be continuously changing,” says Brunini. “My ‘bet’ in this moment would be that we will get back to 2019 volumes, but with a different structure of the market, between 2022 and 2023. That is, of course, hoping we don’t get a bad second wave of the pandemic.”

This year, of course, is about weathering the storm and minimising damage, while also preparing for the restart and anticipating new opportunities.

“For the future, we want to find even better ways to be of service to Milan and Lombardy, with sustainability high on the agenda. It will be tough, and it might take some time, but SEA Milan Airports is resilient and we hope to come out of the crisis with fresh innovations while safeguarding as many jobs as possible.” 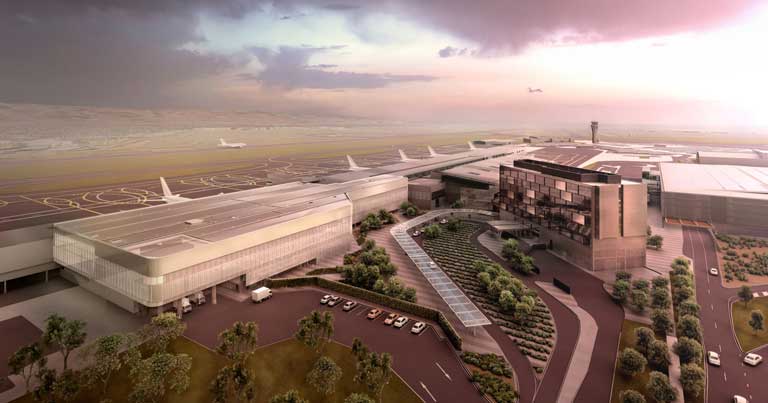 Adelaide Airport’s David Blackwell spoke to FTE to reflect on how the airport has coped with the COVID-19 crisis during the past few months.