Less than five years on from the opening of the first Lufthansa Innovation Hub (LIH) office in Berlin, the Lufthansa Group’s innovation arm is now extending its reach far beyond the European travel and mobility tech ecosystem. As FTE recently reported, LIH’s new Singapore office is now up and running, and later this year another office will open in Shanghai, China. While it is not uncommon for an airline to operate a dedicated innovation lab, the extent of Lufthansa Group’s efforts in this space appears to be unrivalled.

Following the official opening of the Singapore office, FTE had the opportunity to sit down with Christian Langer, Chief Digital Officer, Lufthansa Group and Managing Director of Lufthansa Innovation Hub; Gleb Tritus, Managing Director of LIH; and Lennart Dobravsky, Head of Trend & Market Intelligence at LIH, to find out more about the innovation-focused strategy.

Combining the best of both worlds

Lufthansa Innovation Hub has full autonomy to undertake the work it was created to focus on but, importantly, it also has very close ties to the Group and its wider strategy. “In a nutshell, we are way more in the travel and mobility tech ecosystem, that’s our turf, and Christian is way more on the turf of the Lufthansa Group core business,” Tritus explains. “It works in both ways, if Christian needs something from the outside, meaning the ecosystem, we step in. If we need something from the inside, the Lufthansa Group, he steps in. Obviously, it’s not that binary but usually it works in both ways quite efficiently.”

Tritus, who has been with Lufthansa Innovation Hub since it was launched in 2014, reveals that he and his colleagues pay weekly visits to the Group’s headquarters in Frankfurt, while Langer spends a full day working with the LIH team in Berlin at least once every two weeks. “Thereby, we always try to combine the best of both worlds,” Tritus adds.

The LIH offices and the Lufthansa Group offices have a very different feel about them, Langer reveals, while admitting that he relishes the time he is able to spend with the Lufthansa Innovation Hub team. “There’s nobody else there who has worked for Lufthansa core before and this differentiates us from other innovation hubs,” he explains. “We don’t send people from the core business to the Innovation Hub, with just one exception who’s an active captain for Eurowings and is also working part-time in the Innovation Hub. The thing is, for the Innovation Hub, we try to find people who live a different lifestyle, who live more of an entrepreneurial, startup lifestyle.” This approach, he says, allows the team to look at projects and opportunities from a fresh perspective.

Lufthansa Innovation Hub’s overall mission is multi-faceted. It is responsible for researching and analysing the latest developments in the global travel and mobility tech ecosystem; it develops and tests business model innovations; it initiates partnerships between different business units of the Lufthansa Group and innovative travel tech startups and other companies who are looking for ways to improve travel; and it encourages the Group to strategically invest in innovative ideas and companies.

The strategy is clearly paying off. Just last month, Lufthansa Group and LIH announced that they have entered into a research alliance with travel booking app Hopper to explore the potential of artificial intelligence (AI) in the context of predicting flight demand. A number of other products have also been successfully developed. Among them is Yilu, a consolidated operating platform for the travel and mobility ecosystem that has been designed to interlink all services along the travel chain to provide travellers with a more seamless end-to-end experience. Another is AirlineCheckins.com, which is an automated assistant that can check-in travellers automatically on more than 200 airlines. Users can also access inflight Wi-Fi on 35-plus carriers.

Langer explains that all of these projects are tied together by a focus on digital and the customer experience. “Whenever we think about digital we start from the customer experience and we go from there,” he says. “Digital helps us to make travel more seamless, more easy, to create a better experience.” The make-up of Lufthansa Group, he says, which has hundreds of subsidiaries and equity investments, presents a unique opportunity to deliver wide-reaching improvements and to view the entire travel process more holistically.

The strategy makes perfect sense, but what is the thinking behind the investment in new LIH offices in Asia? “After two years in Berlin we started to look at this pivotal development in travel and mobility tech in Asia,” Tritus explains. “In fact, by the end of 2015 we noticed that it was accelerating quite fast and that it’s not all about Europe and North America anymore. That’s when we started more and more to approach the decision-makers at Lufthansa to say let’s take a closer look in Asia.”

After deep-diving on the region with additional research capacity, the Trend & Market Intelligence team was created. From there the foundations were laid to have a physical presence in the region. Serious conversations about the Singapore office started taking place in early 2018, in May 2018 the commitment was made, and just eight months later the office was officially opened.

“From a corporate standpoint it was quite an efficient process,” Tritus says. “We’re super-happy that we’ve had the opportunity from Lufthansa to do it that way.”

Echoing this sentiment, Langer adds: “This would not have been possible without top management support and we are lucky that our top management really supports the Lufthansa Innovation Hub. Without that, we definitely would not be here in Asia.” While a number of corporate organisations continued to invest in innovation labs and R&D facilities in Europe and North America, Lufthansa was looking to the east. “I always try to say “turn your head eastwards”. Look what’s happening in Asia. The dynamics in Asia are huge,” Langer adds.

Of course, establishing a meaningful presence on a new continent is easier said than done, but Lufthansa Innovation Hub has invested, and continues to invest, lots of time and resource into understanding the region. “About 12 months ago we started focusing on the Asia ecosystem because we realised in western research reports and articles that Asia is usually a white spot when it comes to relevant startups, knowledge of what they actually do, and how this could affect travel and mobility,” Dobravsky explained. “We put manpower and effort into understanding the Asian ecosystem, talking to people, talking to venture capital firms, because usually they are more aware of what’s happening.”

A series of partnerships have also been forged. For instance, LIH and INSEAD, one of the world’s leading business schools, have announced a research alliance in Singapore, while LIH has teamed up with TechCode in China. Partnerships with other air transport stakeholders, including Munich Airport and Changi Airport, are also being discussed. These partnerships not only help to ensure that LIH has a solid understanding of each market, but also provide a platform for its work to be brought to life in trials and tests.

The scale of these ambitions is truly impressive but as with any project, LIH’s expansion must deliver tangible results. Tritus explains that in terms of measuring the success of the Innovation Hub’s activities in Asia, learnings from the last five years in Berlin will provide important guidance. The first six months is all about getting to know the local ecosystem, understanding what is and isn’t possible, and then building an impression of what can be achieved over the following six months, he says.

“You have to find your way, explore and test a lot of things,” Tritus continues. “That went well for us in Europe and I think more than ever it will also be the case here in Asia. There are no blueprints from other airlines for doing what we have on our agenda here in Asia, so we need that freedom, at least for the first year, to explore, to get to know the ecosystem and then it’s time to talk about tangible KPIs.

“However, you obviously want to be measured in the mid-term on quite tangible goals and achievements. We want to have outcomes that a publicly traded company is able to digest. There must be successful investments, there must be spin-off ventures that generate revenue, there must be commercial partnerships, and there must be very deep understanding generated by our Trend & Market Intelligence team. So it all will be quantified, but not in the first 12 months because we need to spread our roots here and understand the ecosystem first.”

While all of this is ongoing, the team will also be preparing for the opening of the next office in Shanghai, which could open as soon as this summer.

“We selected the people in the Lufthansa Innovation Hub for being happy to take challenges in foreign situations,” Langer states. “Their job is to find out new things, structure them in a way that the company can digest, to connect with people and gain trust. Lufthansa Group has been a part of Chinese business for decades… we have a history of doing business in China and connecting to the Chinese culture, and we have many Lufthansa people on the ground, especially in Shanghai. So, we can step on their shoulders and try to do this. We’re confident.”

This confidence appears to be well placed. Rather than following in the footsteps of others, Lufthansa Group and Lufthansa Innovation Hub are creating their own path. In the process, they are building an innovation blueprint that many will see as a benchmark for the rest of the industry. 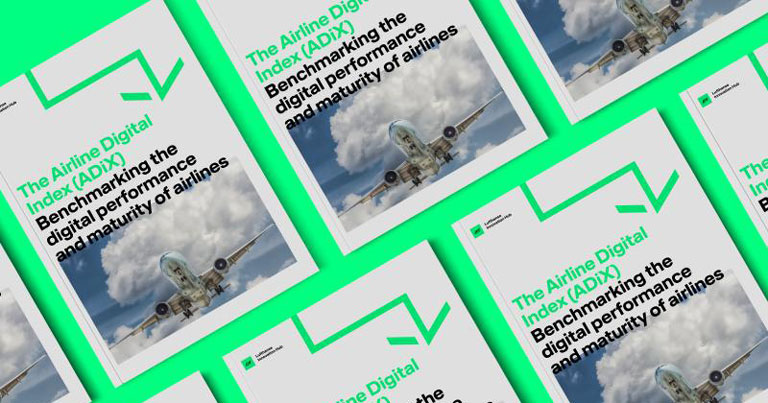 Lufthansa Innovation Hub has published the Airline Digital Index report as part of its effort to rank the industry’s most digital airlines.