The upcoming Future Travel Experience Global (Las Vegas, September 9th-11th) and Future Travel Experience Asia EXPO (Singapore, November 17th-19th) will be this year’s leading forums where the most innovative solution providers in the travel sphere will showcase the next generation of technologies that will shape the end-to-end passenger experience in the years ahead. This week, however, Future Travel Experience was at PTE in Paris, where we took a closer look at a selection of solutions that have been developed to help improve today’s passenger experiences and processing efforts at the airport. Here we highlight some of the most eye-catching products and news that we came across at the show. 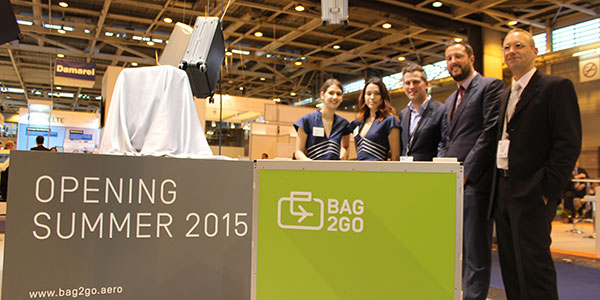 BAG2GO – the independent company that has emerged from a joint innovation project involving Airbus, T-Systems and RIMOWA – was on show, and as the company’s CEO, Jan Reh (centre), told FTE, the solution will offer passengers a new level of “seamless convenience”. While the product itself remained quite literally under wraps in the expo, Reh explained to FTE that it is the first suitcase that can be checked-in via a smartphone app thanks to its embedded, electronic bag tag.

He also spoke of the ambition to make BAG2GO an industry standard, so as many airlines and travellers as possible can benefit from the game-changing technology, which will allow travellers to simply deposit their hold luggage into the baggage handling system upon arrival at the airport, without having to worry about check-in or printing their bag tags. 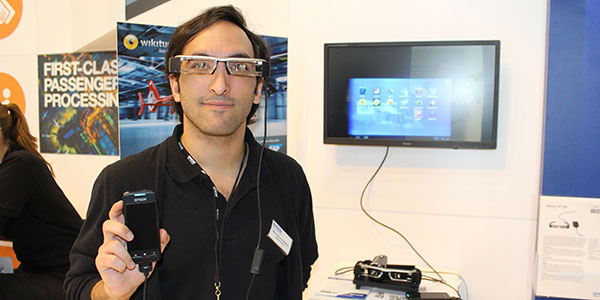 While Epson was presenting its vast array of printers, it was a wearable technology solution that really grabbed FTE’s attention. The Moverio BT-200 – binocular, see-through smart glasses – makes use of augmented reality apps and allows users to watch HD and 3D content. The built-in camera, gyroscope, GPS and other sensors allows the solution to understand and react to the user’s movements and surroundings.

As Epson Europe’s Marc-Antoine Godfroid explained, the smart glasses provide extensive opportunities from a maintenance perspective, but airlines and airports can also pre-load the product with movies and other content, and offer passengers wearable technology-based entertainment either at the airport or in-flight. 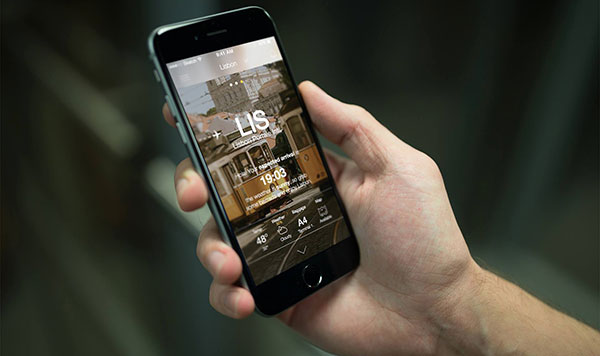 Leveraging the trend of smartphones becoming a key tool in the overall travel process, Budapest-based Kifly was presenting its global smartphone application. Máté Szlanka, COO and Co-founder of Kifly, demonstrated to FTE the capabilities of the app, which is available on Android and iOS platforms. As well as helping passengers stay on top of their travel plans and offering wayfinding guidance in airport terminals, users can view reviews and tips from other travellers, network with other Kifly users in their vicinity via the app and collect points, which can be redeemed on goods at the airport. In an industry where pretty much every organisation offers their own app, the likes of Kifly have the potential to simplify the travel process by giving passengers all of the information they need in one place. 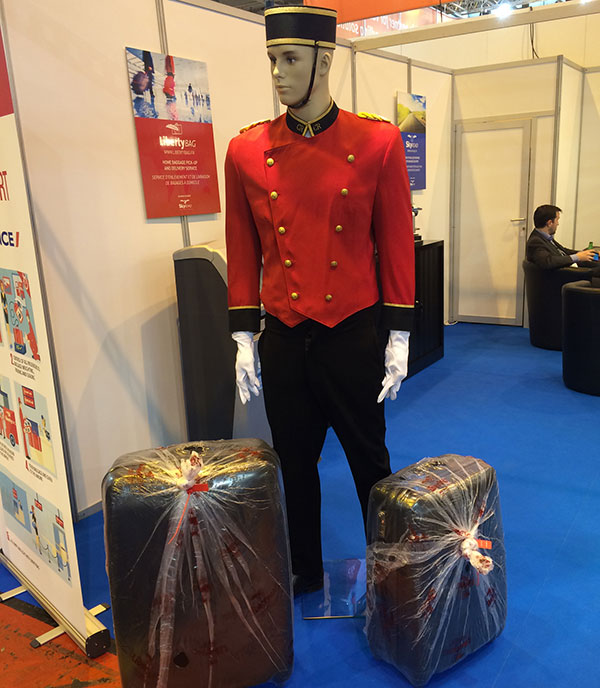 Baggage delivery services have been gaining traction in Europe over the last few months, and this week we had the chance to find out more about SkyRoad’s LibertyBag service. FTE met with Ludwig Lefebvre, the company’s Operations Director Europe, who outlined the benefits of the service. LibertyBag includes pick-up of baggage from the customer’s home, including weighing, tagging and integrity inspection of the bag, and delivery to the airport and deposit into the baggage handling system, so the passenger doesn’t have to worry about their baggage at all during the departure process.

At present, the company works with the likes of Air France and Corsair to offer four services: home to airport, home to home (for Paris to Guadeloupe/Martinique only), airport to home and airport to airport. As Lefebvre explained, having proved the capability of the service in its home market, SkyRoad is now keen to expand LibertyBag internationally. 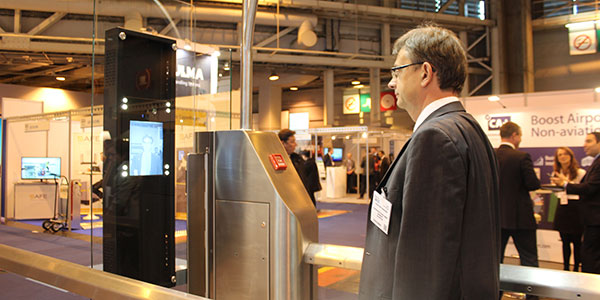 On the Bundesdruckerei stand, Christoph Maggioni, Senior Director of Marketing, showed FTE the e-gate system that was chosen by the Procurement Office of the German Federal Ministry of the Interior to automate and secure the German border at airports. At the end of 2014, a total of 74 e-gates were in place at the likes of Frankfurt, Munich, Dusseldorf and Hamburg airports, and by the end of this year, that number will almost double to 140, as Maggioni explained. He also said the automated border control solution, which utilises facial recognition technology, reduces the processing time for each passengers to less than 18 seconds. 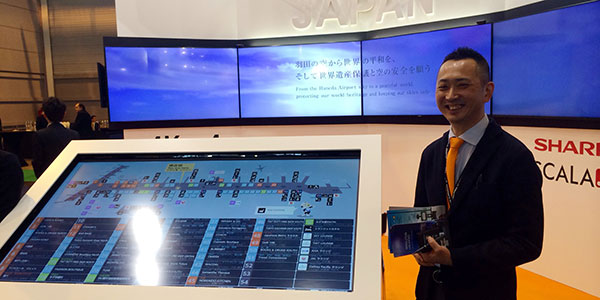 Go to any airport terminal-related show and you’re likely to see a number of digital signage solutions, but FTE was especially impressed with the solutions on show from Indy Associates Co., Ltd. The company currently works with Tokyo International Air Terminal, where it has installed more than 20 types of animated screens. The 4K screens have web cameras on top of the displays, which detect people’s faces as they pass in front of it, prompting a pop-up greeting movie which follows you along the screen – a nice touch that can bring a smile to a passenger’s face and make their airport experience more enjoyable and memorable. 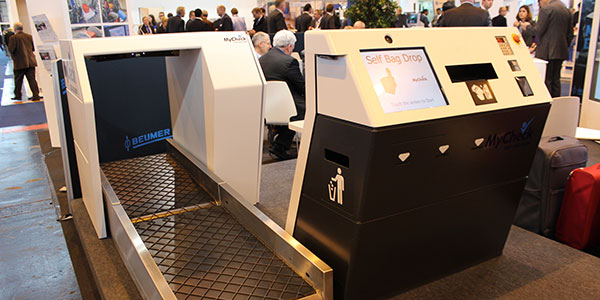 Considering the fierce competition in the self-service bag drop space, we were surprised to see another new entrant in the shape of MyCheck from Crisplant, which is part of the BEUMER Group. Johan Rajczyk, International Sales Manager, Airport & Logistics, showed FTE the capabilities of the fully automated check-in and bag drop system, pointing out the safety and security features such as the tamper detection, which prevents bags from being switched during check-in; double detection to ensure every bag is checked; and motion detection to monitor for the presence of a child or passenger on the conveyor. 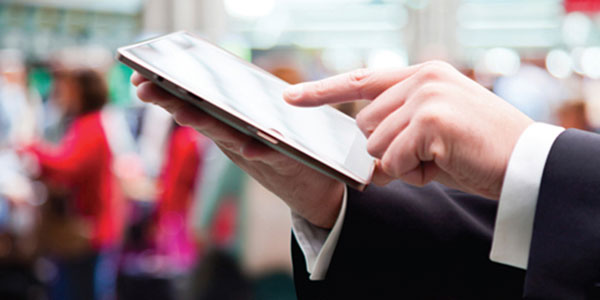 Rockwell Collins this week introduced ARINC vMUSE mobile – a mobile common use passenger processing (CUPPS) solution, which enables airline and ground handling agents to utilise a tablet-based application to check-in passengers from anywhere in an airport. The new solution has been developed to enhance airports’ existing common use infrastructure by allowing them to deal with spikes in passenger traffic or irregular operations by launching a passenger check-in service in minutes, wherever there is an internet connection. Christopher Forrest, Vice President, Global Airports for Rockwell Collins, also explained that ARINC vMUSE mobile “opens up a number of unique passenger processing opportunities that include off-airport check-in, processing for start-up operations and onboard passenger processing.”

Meanwhile, Rockwell Collins confirmed that it is integrating its ARINC vMUSE and ARINC Veripax technologies with the Atkins Identity Management toolkit to capture a traveller’s identity using biometrics and match it with their passport and boarding pass information. The integration will help to streamline passenger processing through the airport, from passenger identification at check-in to self-boarding gates. Nick Whitehead, Head of Strategic Services, Identity Assurance at Atkins, commented: “Airports can use this service to validate a passenger’s identity, ensuring that the individual given the authority to fly is actually the one who boards the plane.” 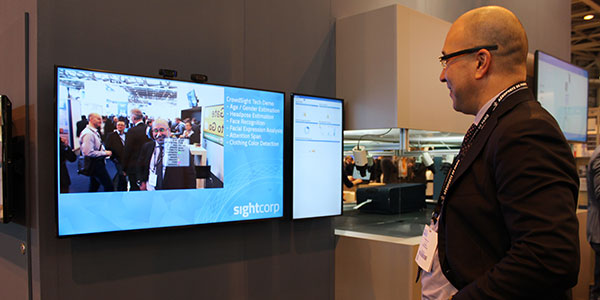 In addition to the security and baggage related products on show on the Scarabee Systems & Technology stand, FTE’s attention was grabbed by a digital signage solution which uses embedded facial recognition technology to automatically measure a variety of factors, such as a passenger’s age, gender and mood (whether they are happy, angry or fearful, for instance), as displayed by Michael Tan, Scarabee’s President. The information can then be analysed by an airport to understand more about passenger profiles and to identify potential areas for improvement. We were also impressed with the digital advertising solution, which identifies the gender of the person looking at the screen and automatically displays a relevant advertisement. 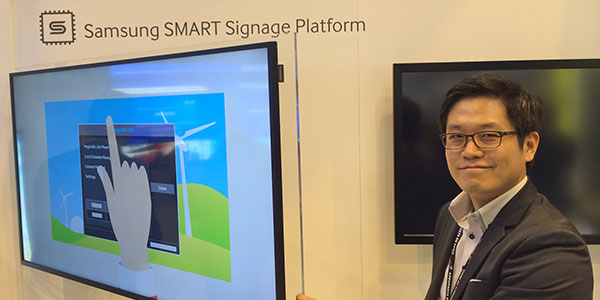 On the Samsung stand, FTE was keen to find out more about the 2nd Generation Samsung SMART Signage Platform (SSSP). As Jaeil Choi, Assistant Manager, Enterprise Business Team, Visual Display, Samsung Electronics explained, the state-of-the-art video wall display eliminates the need for an additional PC, as content is delivered over Wi-Fi. The Samsung UDD-P SMART Signage video wall, which has embedded SSSP, can be controlled directly by a mobile device or laptop. While it is powered by a 1GHz quad core CPU and 1.5GB double data rate (DDR3) dual 48-bit memory, there is also a graphics card built into the embedded media player. 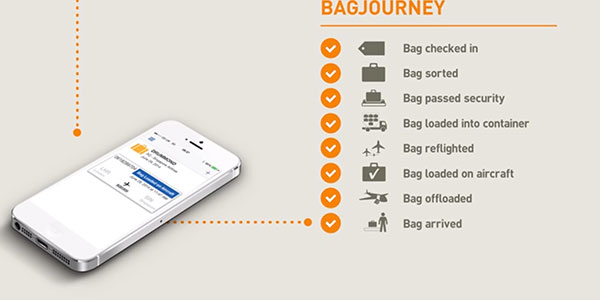 SITA explained that its BagJourney solution, which handles a mammoth 2.5 billion bag messages each year, now allows passengers’ bags to be tracked “like a parcel”. “An immense amount of data is created about baggage and we have worked hard to design solutions to use these billions of messages and provide value to the air transport community,” said Nick Gates, SITA Portfolio Director, Baggage. “SITA BagJourney follows the bag, from check-in to final delivery, through multiple airports and multiple airlines. We at SITA have now made it possible to track airline baggage just like a parcel. We are delivering this service to our community via an application programming interface (API) to allow airlines and airports to integrate it into their existing system quickly and easily, including services such as mobile updates, which they might offer to passengers.” The development is especially relevant given IATA’s recent announcement of Resolution 753, which states: “IATA members shall maintain an accurate inventory of baggage by monitoring the acquisition and delivery of baggage”. The resolution will come into effect in June 2018.

While there are a multitude of self-service bag drops in the marketplace for airlines and airports to choose from, BBC and DSG Systems, who were exhibiting separately of course, both had something different on offer. Both companies now offer solutions that can be installed either in the terminal or offsite, and allow passengers to identify themselves using their boarding pass and then print out their bag tags. So, in theory, a passenger who has checked in online could park their car in an airport car park, print and attach their bag tags and then simply drop off their bag when they reach the terminal. FTE likes these solutions because they fit in nicely with our Airports 2025 Think Tank, which envisages a simpler and more seamless airport experience. 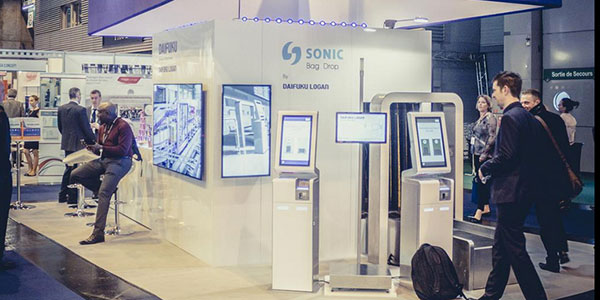 Daifuku Logan, a partner of Phase 5 Technology, was showcasing the SONIC bag drop system, and in an interesting twist, as part of an onsite competition the company gave away a SONIC Bag Drop unit to both Quebec Airport and Dusseldorf Airport for free. The free hardware comes with warranty and includes one year of free software service fees and standard support. All the airports need to do is provide power, internet access and the tags!